Posted on November 25, 2013 by pastorjeffsneighborhood 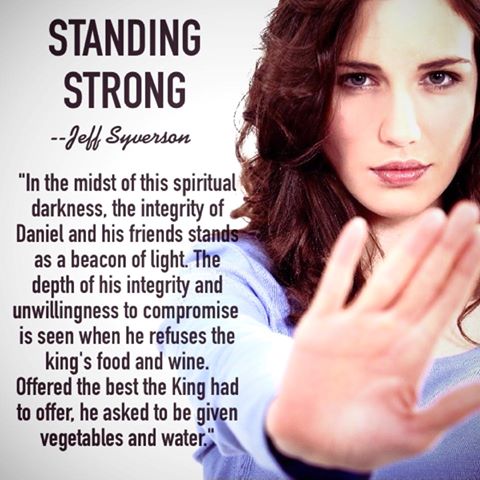 Daniel is an example of integrity in the midst of a culture of compromise. His own people, the people of Judah, had drifted from God and were suffering the consequences of being under judgment: Nebuchadnezzar’s armies had taken them into exile. Still, the compromise and iniquity of Judah paled in comparison to the wickedness Daniel found in pagan Babylon. In the midst of this spiritual darkness, the integrity of Daniel and his friends stands as a beacon of light.

The depth of his integrity and unwillingness to compromise is seen already in the first chapter when he refuses the king’s food and wine. Offered the best the King had to offer, Daniel refused to compromise his principles. So he asked to be given vegetables and water.

God granted Daniel favor. His request was granted. His integrity was further rewarded by God’s favor in the good health Daniel and his friends enjoyed. Amazingly, his vegetarian diet was making him “better in appearance and fatter in flesh than all the youths who ate the king’s food” (15).

God further blessed them with learning, skill and wisdom. Even at their young age and with this limited (though extensive) training, the king found them “ten times better than all the magicians and enchanters that were in all his kingdom” (20).

The world in our day needs men and women like Daniel who will be people of integrity–who will stand up for their beliefs at any cost. They too may expect the blessing of God to do great exploits for God. Daniel 11:32b (KJV): “the people that do know their God shall be strong, and do exploits.”

Born and raised in Minnesota, I have served in churches in Minnesota, Ohio, Oregon and California. I am a graduate of Crown College (MN) and George Fox Evangelical Seminary (OR). I have also done additional graduate studies in New Testament Studies at the Center for Advanced Theological Studies at Fuller Theological Seminary (CA). I am also a graduate of the College of Prayer. Having served as the Academic Dean and Program Director at Horizon Institute of Los Angeles for several years, I have returned to the pastorate and serve as Pastor of Big Trees Community Bible Church in Arnold, CA.
View all posts by pastorjeffsneighborhood →
This entry was posted in Devotional Thoughts, Uncategorized and tagged compromise, Daniel, integrity, no compromise, standing strong. Bookmark the permalink.

This site uses Akismet to reduce spam. Learn how your comment data is processed.