Posted on June 27, 2016 by pastorjeffsneighborhood 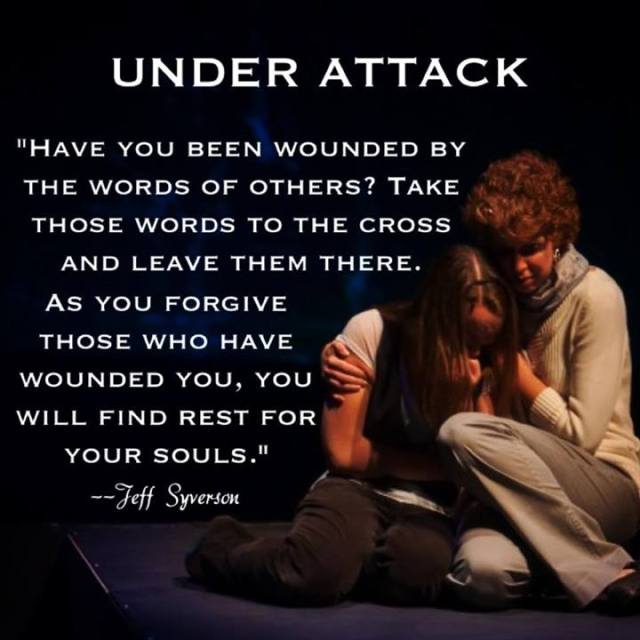 From Open Up Your Heart by Jeff Syverson. Now available on Amazon.com.

They make their tongues as sharp as a serpent’s; the poison of vipers is on their lips. (Psalm 140:3 NIV)

The Psalmist is under attack. Though unconventional, the weapons used against him are not unfamiliar to most of us. He describes his foes this way: “They make their tongues as sharp as a serpent’s; the poison of vipers is on their lips.” Often times the deadliest weapons aimed against us are the words of others—words aimed to wound and destroy.

As children we used to say, “Sticks and stones may break my bones, but words will never hurt me.” Those words may be valiant attempts to downplay a verbal attack but they are untrue. Deep down we all know that words can wound us deeply.

Have you been wounded by the words of others? Take those words to the cross and leave them there. As you forgive those who have wounded you, you will find rest for your souls.

Born and raised in Minnesota, I have served in churches in Minnesota, Ohio, Oregon and California. I am a graduate of Crown College (MN) and George Fox Evangelical Seminary (OR). I have also done additional graduate studies in New Testament Studies at the Center for Advanced Theological Studies at Fuller Theological Seminary (CA). I am also a graduate of the College of Prayer. Having served as the Academic Dean and Program Director at Horizon Institute of Los Angeles for several years, I have returned to the pastorate and serve as Pastor of Big Trees Community Bible Church in Arnold, CA.
View all posts by pastorjeffsneighborhood →
This entry was posted in Devotional Thoughts, Uncategorized and tagged curses, healing, hurt, under attack, wounded. Bookmark the permalink.

This site uses Akismet to reduce spam. Learn how your comment data is processed.